“You’ve got some big shoes to fill.”

I was hearing these words from multiple people as I stepped into a new role. I think their intentions were well-meaning, but their words were far from helpful. 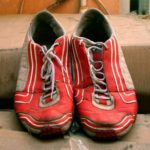 Thinking about how I would fill my predecessor’s big shoes was added to the pressure and anxiety I was already feeling. I was taking on a role I’d never had before, and it came with significantly more responsibility. I wanted to succeed. I wanted the organization to succeed. I also wanted to prove myself. I had my own high expectations, and now I was beginning to carry even more weight from the expectations of others.

I soon discovered that I couldn’t carry this extra weight. If I was going to measure my success by how I met the expectations of others,
I knew I’d be in trouble. Instead, I needed to lead different. Here’s two reasons why:

2. Trying to fill somebody else’s shoes simply doesn’t work. God had wonderfully gifted, specifically called and uniquely equipped my predecessor to serve in a role during a particular season of time. His gifts, calling, equipping, empowering and season were different than mine. I needed to embrace the wonderful gifts, specific calling, unique equipping and particular season God had called me to. In other words, my feet were different. I couldn’t wear anyone else’s shoes. I needed to wear my own shoes. I needed to lead different.

I think David had this same epiphany when Saul had him put on his armor to battle Goliath. David could hardly move, let alone fight a giant. David simply couldn’t wear Saul’s armor (See 1 Samuel 17:38).

So let me ask you to reflect and respond:

1. Are you being weighted down by the expectations of others? Has pleasing others begun to overtake your mission? If so, it’s time to throw these things off, repent and refocus on your audience of one.

If God is speaking to you, take a moment to respond in prayer.