This title may sound like the start of another very well-deserved tribute to the amazing life and tremendous legacy of Billy Graham, but this article is about another spiritual giant. His name was Evon Hedley.

Evon was a contemporary and friend of Billy Graham but I don’t think his name was ever up in lights or on a marquee. That’s why his homecoming at age 102 (five days after Mr. Graham) didn’t cause an international buzz or social media sensation. Yet Evon was and is a spiritual giant. 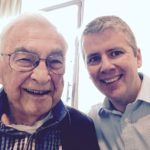 I first met Evon in 2000 when I was a participant in the Arrow Leadership Program. Evon was an on-site mentor who became a special encourager, wise mentor and prayerful supporter in my life.

Evon’s life is an amazing story of God at work. Though there’s much that could be written, I’m going to focus just on Evon’s impact and legacy as a mentor. It’s a profound illustration of the Parable of the Sower – the seed that produces 30, 60, or 100 times what was sown.

Two years ago, I was invited to Evon’s 100th birthday. He was having several celebrations, but this party was for just his mentees. Over his years, Evon intentionally invested his life walking alongside over 100 others through mentoring. The list included pastors, musicians, marketplace leaders, doctors, lawyers, bankers and others scattered across North America and beyond. As I listened to the tributes from several dozens of these mentees along with their spouses and children, I was moved to learn that at least two mentees named their children after Evon.

From his early days, Evon had a heart for intentionally and prayerfully coming alongside younger leaders. One of these leaders has a very special connection to the ministry of Arrow Leadership. Many years ago, Evon was sharing the vision to reach youth for Christ in Chatham, Ontario and challenged a tall, young man in the group to lead the charge. That young man, only 14 at the time, was Leighton Ford.

As Dr. Leighton Ford writes, “[Evon] stayed close to me, guided me, encouraged me, sometimes scolded me a bit, sent traveling speakers our way, and included me in leadership gatherings.” You likely know that Leighton Ford married Billy Graham’s sister and went on to serve globally as an evangelist with the Billy Graham Evangelistic Association. Leighton then launched the Arrow Leadership Program in 1991 to focus on developing Christian leaders who are led more by Jesus, lead more like Jesus and lead more to Jesus. 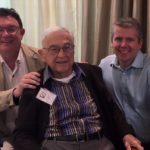 With Evon’s early mentoring of Leighton Ford and then the launch of the Arrow Leadership Program, you can catch a small glimpse of just one wave of the ripple effect of Evon’s life. As Evon invested in Leighton Ford’s life, Leighton invested in many others — including Dr. Carson Pue who would go on to be Arrow’s President. Carson in turn invested in many more leaders, including me. For the last fourteen years I have had the privilege of walking alongside leaders who are in turn investing in many others. This generational mentoring trail leads back to one faithful mentor—Evon.

To share one personal story, a couple of years ago I was feeling overwhelmed and I needed some perspective. So, I called Evon. I asked him if he remembered the pressures and challenges he faced in his forties. To my surprise and despite his very good memory, Evon said that he didn’t really remember those times. His answer gave me very needed fresh perspective that it’s quite possible that what seems overwhelming today won’t really matter or even be remembered when I’m in my nineties.

I followed up with this question, “Evon can you think of what you would do differently in your forties?” His answer was instant, “I’d love people more.”

One of the repeated themes from the mentees at Evon’s 100th birthday was his steadfast love, faithful prayers and relentless encouragement. Virtually every time I finished talking with Evon I heard these words, “Steve, I love you. I’m proud of you and I’m praying for you every day.” Those words are precious gifts that I believe every leader and Christ-follower needs to regularly hear.

Can you think of an Evon in your life? If so, I encourage you to send them a note or make a call to thank and bless them for their impact on your life. If they have already left this world, then contact their spouse or family and thank them.

Could you be an Evon? You don’t need to be famous to used by God to make a tremendous impact. You just need to be faithful, available and intentional in walking alongside others.

Imagine if all of us followed Evon’s example and intentionally walked alongside others for God’s purposes and glory? Like Evon’s, the ripple effect would be far more than we can ever imagine!

Cheering you on in life and leadership!